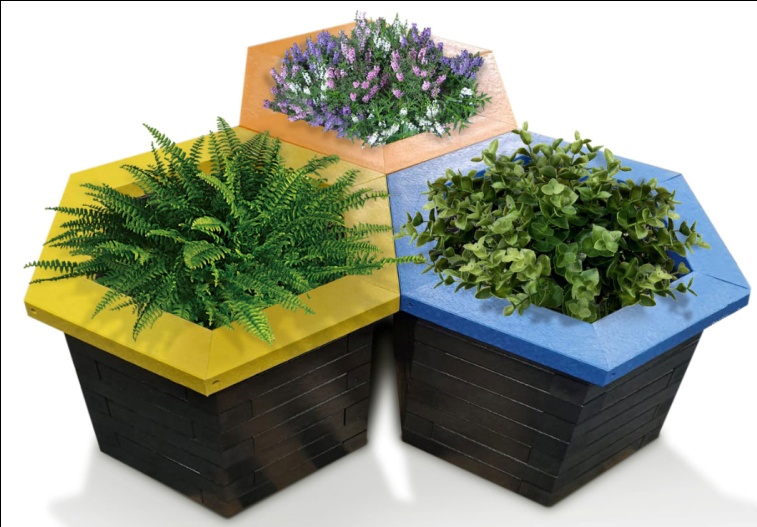 Xplore! Science Discovery Centre, Wrexham, has announced a biodiversity trail using a series of planters in Wrexham town centre. These planters would mark a pollinator, food and herb trail utilising the support of volunteers and local community partners.

The planters would contain appropriate culinary and medicinal herbs plants and plants beneficial to pollinators and a range of fruit and vegetable plants. They would mark a pedestrian trail a mile long, leading from the entrance to Xplore! in Henblas Square, continuing via Hope Street, Regent Street and Crispin Lane to the site of the Science Garden on the Glyndŵr University Campus. Each planter would be approximately 300 metres apart. The hexagonal planters are designed to fit together in a block of three, rather like a honeycomb structure. Each planter will have attractive illustrated information relating to the trail, the plants in that particular planter, together with details about Xplore! and partners such as Incredible Edible Wrexham.

Once in place, volunteers from various community groups and charities based in Wrexham would look after the planters. They would provide an ongoing attractive living feature in the town centre and add biodiversity to a barren and predominantly “hard urban streetscape”.

A project distributed apple pips originating from the 300-yearold apple tree at Woolsthorpe Manor, Lincolnshire to selected science discovery centres across the UK. Woolsthorpe Manor was the birthplace and home of Sir Isaac Newton, and the tree was already fruiting when Newton lived there! As their contribution to the project, Xplore! (then Techniquest Glyndŵr) worked with the pupils from two local schools to sow the apple pips. The seeds germinated alongside other seeds planted by Techniquest, and these have now grown into small saplings ready for planting. The seedlings were nurtured by Simon Brown, a volunteer with the project and previous employee of Techniquest Glyndŵr.

Go to xplorescience.co.uk or sciencecentres.org.uk/projects/ newtons-apple-seeds for more information about this. The Trail The pollinator trail would start with three large planters in Henblas Square. They would contain the apple saplings originating from the Newton’s Seeds project together with a native crab apple sapling. These trees would assist with pollinating the ‘Newton’s Apple Trees’ and help produce apples in future years. Interpretive signage would explain the origin of the apple trees and also Sir Isaac Newton and his connection with science and the development of physics and mathematics. Why not bring your family along at the end of August, when the trail is expected to be ready? You could also register your interest as a volunteer via their lead project partners, Incredible Edible and Yellow & Blue.